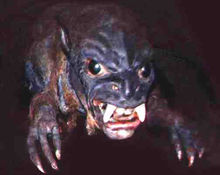 It is almost Halloween and everyone needs more to read about ghosts, creatures and other ghoulish things that exist in the western United States.  Today’s bedtime story, children, is about a couple monsters living here in Arizona and other parts of the Southwestern United States. So get under the covers and turn on the lights.  Don’t bother screaming because no one will hear you – buuuwaaahahahahahahah!

Our first tale is about a beast that defies science but leaves enough evidence to keep even the naysayers saying maybe.  Tales of El Chupacabra, which means “goat sucker,” originated in Puerto Rico and spread through Latin America, up through Mexico and into Southwestern US (technically Chupy is an illegal).  It is said El Chupacabra has left thousands of mutilated, blood-drained animals in the areas it is said to inhabit.  the victims are mostly goats, cows and chickens and are discovered after having been attacked in the night.  They are emptied of blood with well-defined puncture wounds in either the neck or the hindquarters but with no evidence of external bleeding.   Also alarming is the lack of any footprints or animal tracks around the carnage.  Stories of the beast only date back to the 1950s and 60s, with one of the first reported sighting in the US at the turn of the century (21st century). A Tucson resident by the name of Billy Nubian reported that he was awakened in the middle of the night by his two panicked goats.  When he went outside, he saw a “rat-like” creature pinning one of his goats to the ground.  A few years later, in 2003, another Tucson resident recalled a “half-man, half-ape looking thing” squatting in her front yard (reports did not mention if she lived near the University of Arizona frat houses, which might explain the sighting).  When the creature saw her, it crouched and leapt towards her, making a hissing sound before running away.  The creature was described as having big piercing eyes, large hind legs and an arched back with spines.  She was not familiar with the legends at the time but her description matched others – kangaroo-like legs, large eyes and a spiked back.  And why would the crime scenes show no footprints?  Because other reported sightings have claimed Chupy also has leathery wings.  One Arizonan said he spotted a small ape-like creature crossing I-19 towards the Arizona/Mexico border that flew into the man’s headlights and into the night.

El Chupacabra has yet to attack humans but there is another creature from Native American traditions that do.  Tribes in the Numic language group such as the Paiute in Northern Arizona, tell stories about the Ninimbe.  These tiny elf-like creatures with tails and large heads lurk around wells, bushes and rocky places and are said to be cannibals.  Pima Indian tradition tells of the Vipinim, said to live below a particular spring south of Sacaton, AZ.  Vipinim are related to water babies or water monster children that resemble children but are covered in green or black hair and have webbed hands and feet.  They mimic the cries of drowning babies to lure victims to the water where they drown them. But are these superstitions?  In 2004, archeologists discovered evidence of three to four foot tall species who may have shared the earth with Homo sapiens as recently as 18,000 years ago. So next time you are visiting the desert Southwest, leave your livestock at home and don’t be fooled by the sounds of crying, drowning babies in the dark pool of water.