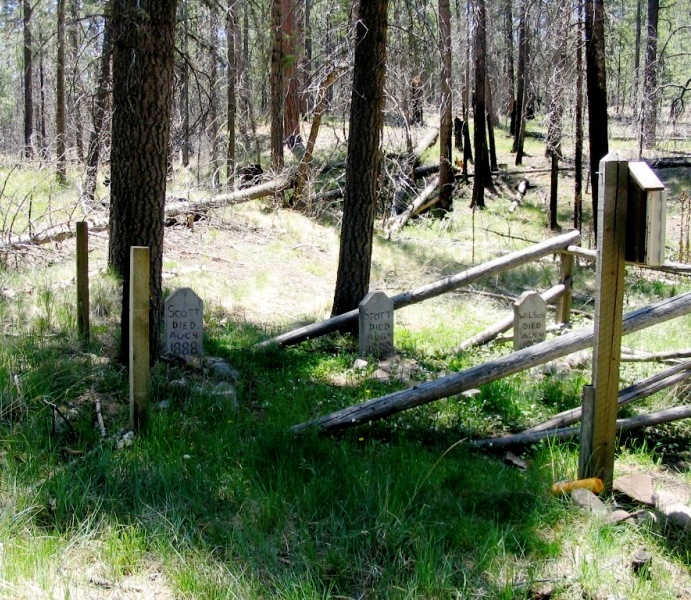 Halloween is the best time to visit cemeteries and grave sites. What a better place for a great scare or to see some ghosts!? Head out at night for some additional goose bumps.

A mile hike from along the Hangman Trail from the Black Canyon Trail which is also identified as Forest Road 86 in the Apache-Sitgreaves National Forest, you will find the graves of 3 cowboys, Jamie Stott, Billy Wilson and James Scott, all abducted and from Aztec Spring Ranch and hung on August 4, 1888 by a posse of vigilates. All three men were cattle ranchers in the area and were acused of stealing horses. All were hung from a single ponderosa tree not for from the burial site. The story goes that the murder of the 3 cowboys was conspired by Deputy Sheriff J.D. Houck of the Black Canyon Sheep Ranch. He had no warrants for any of the three young men who were 24 years old each and the horse theiving was a trumped up charge over the right to allow his sheep to graze on land owned by Stott.

Houck ordered masked guards to keep the bodies hanging in the hot August sun at the junction of the three trails until August 15th. Eventually, witnesses to the abduction were able to notify a group of responders from Snowflake who were able to cut the bodies down, bringing them down by horsea a half mile down the to what are now the present gravesites.

Elisha Marcus Reavis (1827-1896) is a legend in the remote area of the eastern Superstitions. The very homestead he built is a destination for hikers and backpackers looking for perennial water, a luch landscape and some apples – yup, apples. The apple orchard he planted still bears fruit. He also grew other fruits and vegetables and raised livestock – all in the high deserts east of Phoenix. He was also a well-read man and started the first library in the Superstitions.

On April 9, 1896, Elisha had told a friend he was about to leave for Mesa to buy seed potatoes. On May 6, 1896, having not seen Elisha for some time, friends searched and discovered his remains four miles south of his ranch on the trail. His mules were tied nearby and half starved. Reavis’ remains were scattered by wild animals and what remains remained were buried nearby where the soil was softer under a cairn of rocks. His grave was marked with a stone marker. You can visit this grave by hiking in the eastern Superstitions along the Reavis Trail – or take a trip with us!

Cochise Stronghold is a canyon in the Coronado National Forest in the southeastern corner of Arizona and is open to hiking, camping and climbing. But in the

mid 1800s, the area was home to the Chiricahua band of Apache Indians, led by the Apache Chief, Cochise. After many years of resistance to the American intruders, Cochise finally made peace with his enemies and retired to the Chiricahua reservation. He died of natural causes in 1874 and was laid to rest in a secret crevice in the Dragoon Mountains. Only his people and a white man by the name of Tom Jeffords knew the location of his grave. But a great place to hike and backpack. And you just never know what you might encounter. Visitors to the Cochise Stronghold believe to have seen the warrior – a man in Native American dress with long black hair is often seen roaming around the hills and campers have reported hearing a tune echoing among the rocks and seeing a man with a flute sitting atop one of the towering peaks.

Want more scary stuff? Visit our blog! We also offer guided backpacking trips all over Arizona so if you are scared to go it solo, come along with us!